Minister to force O'Leary 'taxi' off the road 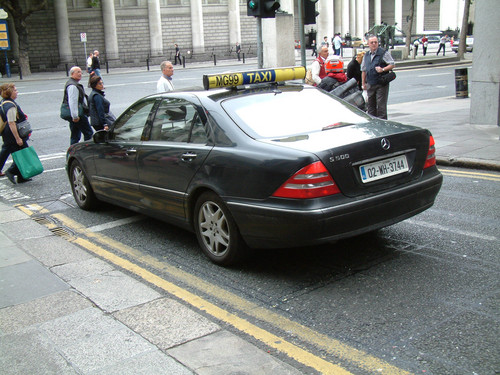 Ryanair boss Michael O'Leary's canny plan to avoid the traffic jams may be legal, but it's unlikely to win the controversial tycoon any more fans.


TRANSPORT Minister Seamus Brennan last night moved to close a loophole that has allowed businessmen, including Ryanair boss Michael O'Leary, to buy taxi plates to use Dublin's bus lanes. Solicitors, accountants and even a washing machine repairman have been getting plates, it was claimed last night. Hundreds of maintenance and service companies have also bought plates, costing €6,000, to help them get around the congested city.

Irish Taxi Drivers' Federation president John Ussher said Mr O'Leary was the first high-profile case to come to light, but they had seen people from all professions "driving taxis".
"There is no way of knowing how many people have been doing this - it is possible it could be in the hundreds," he said.

Mr Brennan last night disclosed he had become conscious of increasing concern that businessmen were taking advantage of bus lanes under the taxi system.The minister said businessmen paying for plates to avoid traffic was "not in the spirit of public service as it should be". Mr Brennan has asked officials to examine the legislation and regulations to establish the legal position.The minister has also asked Interim Taxi Regulator Jimmy Farrelly to examine the adequacy of existing regulations governing entry into the taxi industry and any possible abuses of the system that are occurring.

"The minister believes that if you have a public service vehicle you should be available to provide a service to the public," his spokesman said.


Taxi unions lashed out at the disclosure that the no-frills airline tycoon could beat the capital's gridlock by putting on his recently acquired taxi plate. A multi-millionaire, Mr O'Leary's taxi plate gives his chauffeur-driven Mercedes access to bus lanes. One of the key issues is whether Mr O'Leary's car is able to use Dublin's bus lanes as the plate was issued by Westmeath Co Council last month. The licence was registered to a company, Tillingdate Ltd, of which Mr O'Leary is secretary and shareholder. Under the current law there is nothing to stop motorists registering for taxi plates and making use of the bus lanes.

The Dublin Transportation Office said it would be very concerned if the practice became widespread resulting in the bus lanes becoming less effective.

"You could well have a scenario where motorists buying a plate will eventually pay the price by directly contributing to a problem which brings us right back to square one," a DTO spokesman said.

Labour's transport spokeswoman Roisin Shortall said Mr O'Leary was "thumbing his nose at the travelling public". She said there was anecdotal evidence that this was a growing problem where wealthy people "can buy their way on to bus lanes".. Ms Shortall called on the minister to retrospectively close the loophole which allowed this practice.

Mr Ussher said Mr O'Leary was "giving the two fingers" to other motorists.

"Not only is it offensive to people in the business, it is also offensive to every motorist on the road," he said. "My message to him would be get out of the bus lanes and get out now."

"It flies in the face of the efforts being made by the director of traffic to encourage the public to use public transport," he said. "It is morally wrong for a car to be masquerading as a taxi."

He said several businessmen had already used the tactic, but Mr O'Leary was the only case to be made public.